Let’s talk about the Arena today. Although it is already quite entertaining, there was this feeling that it needs to be more ZPG-friendly. One god may wish to bet on luck, but the other might have another plan. It’s time to bring in some justice here. Introducing a brand new Arena mode, with no influences or godvoices – a Zero Player Game as it is!

A few things to keep in mind:

Enough about rules – how to get into this ZPG-Arena? There is no new button in the Remote Control, so here is how it will work with the old button. If you send your hero to Arena during the first 5 minutes of each hour (e.g. from 10:00:00 till 10:04:59, 11:00:00 till 11:04:59, etc) and confirm that you want ZPG-Arena you’ll get there. Outside of this 5-minute interval all fights will be held on the old and usual Arena, the one with the influences and stuff.

Make sure to use the latest app, because the old versions may throw some errors. (Also the game checks the time interval based on the UTC time, so for the folks living in the +30 min time zones the local time will be shifted: 10:30:00 – 10:34:59, etc).

Finally, we’d like to remind once again that the heroes’ levels and equipment are totally not important in the arena and won’t affect the fight’s outcome. Yes, even if it’s x3 times better.

While the happy ark owners were busy searching for booty in the open sea, everybody else back in Godville was wondering about their progress. Guess no more – it’s time to drop the drapes from the newly opened Pantheon of Catch and see it all by yourself. The zest of this pantheon: it counts only the full pairs of both manimals and fenimals.

Secondly, it will be helpful to address some unexpected confusion, which happened after recent addition of fishing. There was an old aura of baiting, which helped the heroes to find monsters of the day, monsters with special abilities or tame a pet, but it didn’t actually do anything with the real fish. From now on, this old aura will be called the aura of trail. Since the nature abhors a vacuum, there ought to be a new aura of baiting, but this time around it will help the heroes to get a better catch and make them fish more often.

As usual for this time of the year, snow sprinkles the fields. This strange white substance causes quite interesting transformation in the Godville’s fauna. Traveling minstrels report spotting herds of Satan Clawses and alike, carrying bags, allegedly, full of presents. Another kind of monsters – special Holiday ones – known to drop some “blue pills” also known as accumulator charges. These days even regular monsters run their pre-holiday errands, which means they might have something interesting and activatable. As a tradition, a merry town of Laplandville seems to appear out of nowhere just in front of the Godville’s gates.

This time around, there is one more present. A sudden and equally unexpected alliance of Mad Scientists and Godville Times Editors produced something special – Godpower Capacitor. This marvelous thing slowly draws godpower out of the Godville’s thin air for any god to use. Yes, with a flick of a finger – once a day – you can transfer its contents into your Remote Control and get a nice power boost for whatever you need!

However, there is a catch: the capacitor is one, but gods are many. Normally, once the capacitor is used it’s discharged to 0% and it will take some time to get the charge again. But since holiday air is very special and, you know, god-powerful, for the next few days it will always have at least 25%. Afterwards, things should get more interesting and will require a bit of skill and luck to take more out of it. Give it a try, let the force be with you!

This world didn’t have a lot of water. Just a lake here and a river there that a hero may note in diary. But then, the giant construction happened. Under all the pressure of temples and arks the flat world of Godville broke down and made a big puddle. Finally, the arks are afloat.

The heroes already spent some time near the water with their fishing rods and seem to be ready for more epic waterborne activities. The time has come to leave this sinful land and make some splashes on water. All heroes with completed arks are now ready to sail!

Open-sea navigation is not easy to explain in a few words, so here is a comprehensive manual. It’s highly recommended to read it before hitting the new Sail button in your Remote Control. Savvy?

It looks like a new kind of hobby is spreading through Godville. Nobody knows how it all started, but more and more heroes, from beginners to the most seasoned adventurers, are being spotted sitting next to rivers, ponds and other water bodies, with an artifact attached to a line on a stick… They call it “fishing”.

Surprisingly, the loot is not just fish: it could be a golden brick or something else easily activatable. Taverns are already full of stories about a bigger catch fished out on a “bolder” bait. In the best ZPG tradition, divine influence is not required or it can even be harmful – nobody wants to scare away all the fish with noise or thunderclaps.

In the mean time, a few overly enthusiastic shipwrights got their hands on some ancient scriptures and realized why they needed arks in the first place. All this time they were meant to preserve life in this world – which in their heroic minds translates into finding a thousand pairs of twos of every kind and packing them into their arks, just in case.

However, there is a problem – heroes have gone back and forth through Godville countless times and all they saw were some genderless and occasionally male creatures. Where do they find fenimals? Well, checking the waters is worth a shot. While high-waters are not yet available due to the ongoing construction in Godville’s port, a recent fishing craze should come in very handy.

This new heroic undertaking won’t get unnoticed: Godville’s accountants are already crunching some numbers and the builders were noticed erecting something new in the pantheons area.

Godville Times editors are always looking for the new ways to entertain the readers. Еspecially if it’s something interactive… like a crossword, but different. Bingo!

Yes, Bingo is a new newspaper mini-game – with a Godville twist in it. Instead of collecting boring numbers, here you’re filling a grid with pieces of artifacts. Yep, the real virtual artifacts from your hero’s pockets! Just pick a moment when your hero has something worthy in the inventory and “borrow” the required trophies for your divine needs.

Why? Because it’s fun. But there are other nice perks too. If you extract artifacts for bingo three times during a day your hero will get a nice gold reward. Also Top-100 of the luckiest players will be published in the next issue of newspaper. More on bingo rules can be found in this forum topic.

Jack of All Trades

A new development in the Godville’s Economy. Just after few years of relentless savings a hero guided by Kingdada managed to collect the first ever retirement fund (which btw consists of thirty-freaking-million gold coins). You may be wondering what in Godville could cost that much and who can possible have this kind of money?

Traders, of course! These are the people managing millions day-in and day-out, profiting off the artifact circulation. They cheat and swindle our poor champions every day while calling it a “service” and being in that business sure costs money. So, what could be a better investment for a run-down hero than a long overdue right to rest and leisure.

By buying a trading shop and jumping into a merchant’s skin a hero gets a new way to lead his life. All his usual trade-pray-rest-sleep duties can now be done at one place – somewhere around a cash register. Other heroes will come to sell their stuff, some monster will drop by to buy it. Also, he finally can sell his knocked tooth to some other trader for profit! Sure he can get a tax audit once in while, but that won’t stop him from being happy, because now he has a trade level counter and he does’t even have to lift up his butt!

But what about the god? He can now send his hero to do the trade or throw him back into battlefields. Also, he gets some leverage over Godville goods markets, with the new ability to place orders on the wanted items in Godville Times. And since the god has this 2-in-1 kind of a trader-hero thing he can now have up to 200% godpower to rule them all.

Let’s congratulate Kingdada, shall we?

The term of the first-elected guild leaders is nearing to an end, which means now is a good moment to lean back with a cup of something, retrospect and make minor adjustments. According to the Godville Stats Department more than 75% of guilds have elected a leader, which shows that election system works – mostly. To make things a bit better, the minimum election threshold will be lowered to 30% and the governing period will be increased to 4 months. A quick note here – both the guild totem and custom rank won’t disappear once unlocked, even if the guild fails to elect a new leader. However, a new leader will be able to change them.

The next news come from the Godville Times reporters permanently stationed underground:

A new breed of boss was noticed in the wild. Unlike the Deafening bosses, which outvoice divine commands with their roar, the new Overhearing species are quite intelligent to actually understand god voices and even react on them, occasionally.

A new artifact was spotted in the Godville’s markets. It’s said to make kind heroes kinder and evil heroes more evil much more quickly than the normal influences do, which should come in handy for reaching an extreme alignment. Though it’s very rare and uncraftable to heroes, it’s known to be of a good value among traders.

Meanwhile the newly-discovery aura of Curiosity is reported to temporarily boost the heroes’ IQ level, enabling them to activate artifacts all by themselves, without using the godpower (except of the arena ones, those are still too complex for heroic brains). This could be very handy or very ill-timed, but it will sure be fun. Hail ZPG!

The winter is finally coming to an end. The most attentive of us have probably noticed the Shedding monsters roaming in the wild or some mangy fur coats in the pockets of our provident champions. Let’s also seize this opportunity and shed a few layers of the old content by doing our regular Spring Cleaning. If you believe that some of the game’s phrases are unfit, inappropriate or just boring make sure to post them in this forum topic.

Meanwhile, in the spirit of Spring renewal, the game got a big content update. There are literally hundreds of new monsters, artifacts, and diary phrases. Traders finally got fresh stock of new high-level equipment. Even the newspaper should look more fresh.

And finally, one breaking news. For the last few years the most often feature request was to add graphics to the game. So today, we’re happy to announce that from now on Godville has graphics! Well, not in the usual sense, but if you’re using the latest mobile app (iOS, Android, Windows Phone) you can now “Picturize” any game text into a nice looking picture and save it for your viewing pleasure in the future. Rejoice! 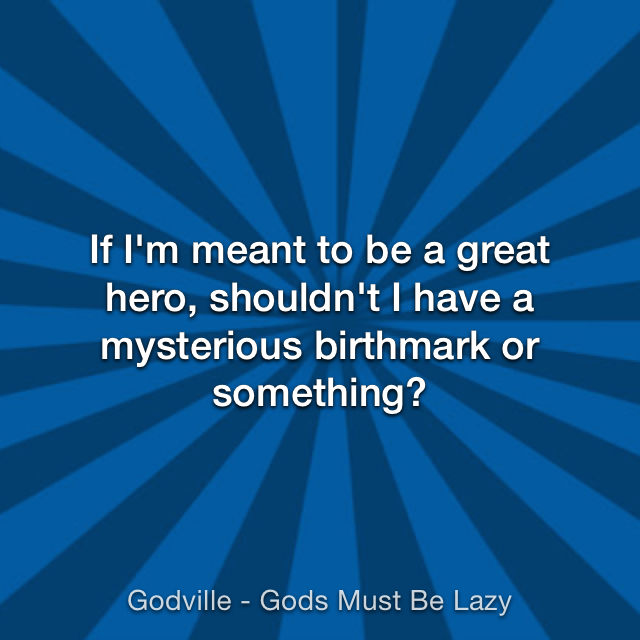