We Need To Go Deeper

Hello, dear deities. Let’s talk about Godville’s dungeons. They are gloomy and roomy, but kinda flat. What could possibly add more depth to them?

Please welcome the Basement – the new low of dungeons.

From now on, spelunking heroes could stumble upon stairs ◿. Sometimes it’s clearly visible on the map, sometimes it could be hidden near the entrance. The heroes won’t go down by themselves – they have to be commanded to do so by an experienced deity with a Lab boss.

That’s because the basement is harder than the main floor. Treasure hints are ambiguous, mazes could amaze. Bosses are tougher too – they all are higher-ranked, so the treasury is guarded by a 4-ability colossus.

So, why would one dare to go there, you may ask? First of all, the basement’s treasury has a bit more riches for grabs. Secondly, every conscious hero will also get a nice coupon for free stuff there – similar to those in Godville Times, but bolder. Finally, new treasure bosses could be stripped of precious 4 lvl parts to breed even more powerful bosses in the Lab.

And if you don’t need all of that, just stay on the main floor. Еverything there stays the same, including a treasury and its gopher wood.

Make sure to update your Godville mobile app (Android, iOS) for new stuff to work correctly. One more thing – a dungeon with no trait from now on is called a Dungeon of Normalcy, so don’t worry when you see one.

Warm greetings to you, chilling deities!

Christmas and holidays are right ahead and Godville has quite a few things to offer for this occasion.

For starters, keep an eye on winter snowflakes ❄. There are many ways to get them: heroes knock them out of monsters, reindeers 🦌 and fish out of ponds, while gods can get an extra ❄ from the godpower capacitor in Godville Times. These snowflakes are actually quite useful. They are valuable among traders, the bingo game takes them as wildcards – and if a hero gets four or five of them there might be some serious snowman-centric fun with presents.

Speaking of holiday presents – which is the main part, of course. There are lots of them and they could drop from everywhere: monsters, snowmen, newspaper’s bingo, you name it. These gifts come in various shapes and forms and could be activated for free to get valuable resources, chunks of experience, godpower and other neat stuff.

Let’s not forget about Laplandville – this festive town known for its discounts and other bonuses, located right next to Godville, is about to open its doors. Meanwhile, Santa Clawses and Satan Clauses are back in the field, spreading holiday spirit and presents (and even tameable with some luck).

There are a couple more novelties of this holiday season:

The feast will last till January 2. Happy Holidays!

Halloween Event
Halloween is around the corner, so get ready to be startled for the next few days! All the spooky things are here – profitable pumpkinezed🎃 loot, risen monsters, hungry tribbles and other eeriness. Don’t miss the valuable glowing pumpkins: your hero’s job is to get them, your job is to smash them.

As usual, if you want to suggest an in-game monster for a pet’s job, feel free to send it in via Ideabox ‘other’ section. The next batch is imminent – sooner or later.

Content Refreshments
Once again, we took a deep dive into the never-ending stockpile of Ideabox submissions and sorted out the most promising ones. Hope you enjoy the five hundred new phrases – for the diary, duels and newspaper – that are now in the game. Thanks to all authors and ER editors!

Divine Signs
The life of an ordinary hero is quite determined: you can expect him to do certain things in a certain order. It’s nice but will be better with a bit of variety.

Please welcome the new divine power: signs! Occasionally a hero may wonder: “Should I spend gold this time?” or “Should I search for a shortcut?” or “Should I improvise in a prayer?”. You can spot these thoughts in the diary by @ symbol and bless him by sending a sign (or just ignore, to let things go as usual).

Make sure you are using the latest Godville app (Android, iOS). If you want to stay on top of heroic requests, you can turn on the new push notification option for Signs in the app’s settings.

New Achievements
Last achievements were added quite a while ago, so it’s about time for refreshments:

Picturize 2.0
Did you know that you can turn any game phrase into a picture just with a couple taps? Well, now you surely know. And today’s app update makes this feature more awesome: now you can change fonts and add decors. Here is how it may look like: 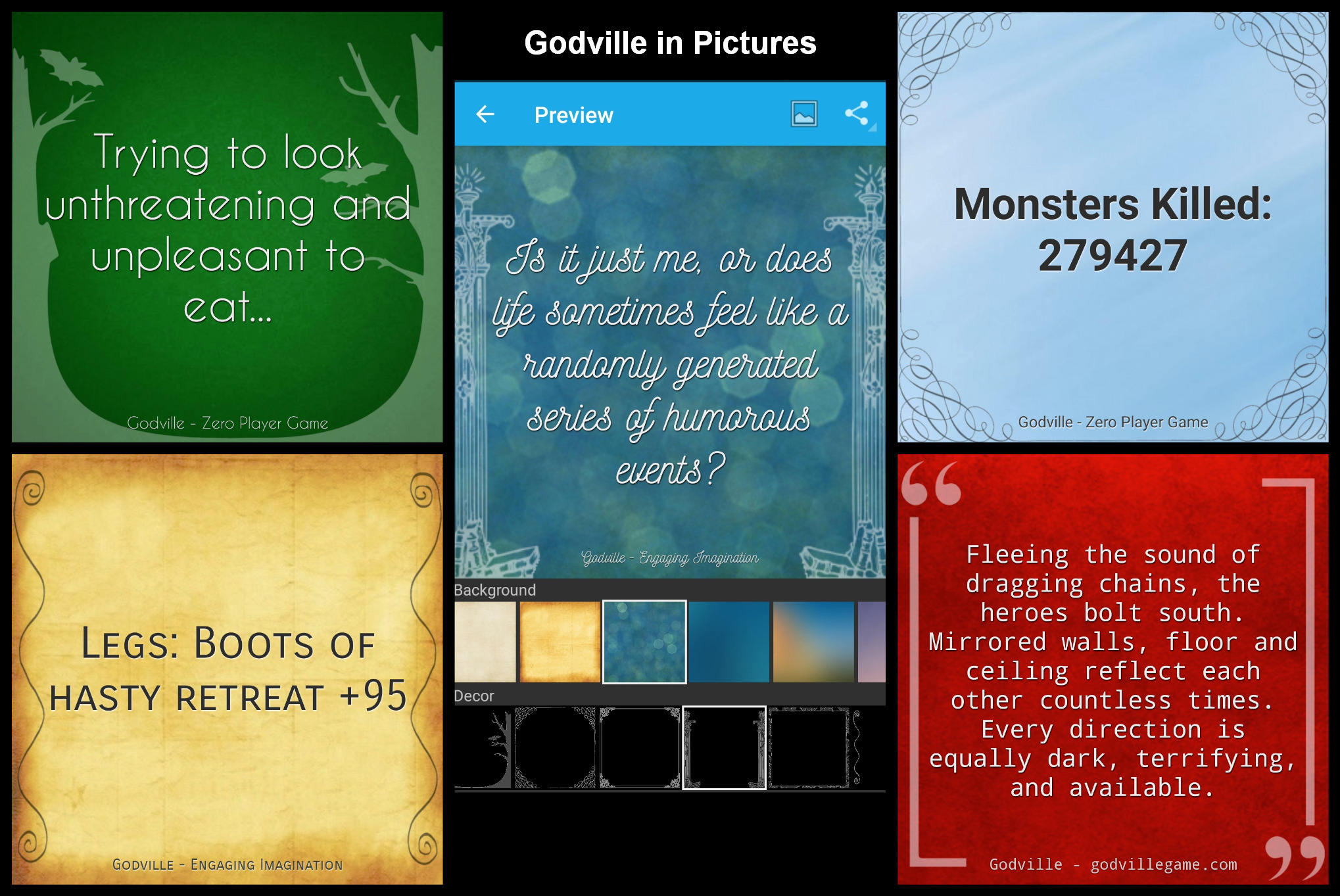 Last note: September is coming, and so is the mushroom season. Yummy!

GodWiki Art
Godville is a text game, but did you know that it has pictures too? Thanks to the relentless creativity of our players, GodWiki steadily accumulated some quite interesting pieces of artwork that clearly deserve more visibility.

So, here is an experimental feature to shed more light on this — Know Your Monster section in the Godville Times newspaper. Guess what monster is in the picture to get a link to the full wiki article, while your hero gets a small reward — with a special mini-quest built-in.

Btw, we’d be glad to reward the art made for GodWiki with some gratitude pantheon points. If you made a decent and original picture for a known Godville entity (monsters, towns, pets, etc), make sure to send a link to it via Ideabox “other” category along with a short description. “Know Your Monster” event will run for the next few weeks, but with the new art it may come back again later.

Content Update
During the last few months, we managed to get through the large part of Ideabox content submissions — finally! Today the game got hundreds of new monsters, artifacts, earthly news, and dungeon and sails phrases. Huge thanks to all the authors and ER-editors for their work.

Heroes’ Birthdays
There is one more small, but nice feature: now you can congratulate your hero on his birthday — and it won’t be lost in vain. The hero will answer and will even give something back in return. You can track the birthday of your champion on his public page or in the Birthdays section of your guild stats page.

Dear deities, are you thirsty for some news? Today we have half a dozen to unpack:

Nice day today, isn’t it? May 10th is always nice, because back in 2010 on this very day Godville was born. Eleven years later and it’s still going strong and kicking, amusing all the deities and their heroes.

All these years would not be possible without the help from our tight-knit community of creative deities. Be it an idea submission, a bug report, ER or wiki edit or just hanging around — it all makes Godville better for everyone. So let’s get our anniversary cookie jar and grab some goodies.

First of all, congratulate your hero with a godvoice to get a festive pack of godpower charges. Then use godpower capacitor in Godville Times (while not in a duel) to get something else. Hunt for sweet anniversary monsters gleaming of godpower. Do all of that for the next 3 days to keep the party going. Let the fun begin!

Dear deities, today is epic. During the last 10 years, there have only been a few days like this: completion of the first Godville temple, first ark, first shop…

So today marks the day of completion of the very first Book, which Hairplug4men has finished just a few moments ago. Congratulations!

Let’s dive into what it all means:

And it doesn’t end here. The main purpose of the Book of Creation is, obviously, to create. Using it, a small god can create worlds — not too big, but enough to fit a party wandering around in the search for treasure. Also known as “dungeons”.

Right, the god becomes a dungeon master — with a striking new ability to create a personal one. Real one, for real heroes! These dungeons even have some distinctive traits, like a brand new type of treasure clues made of glyphs or an unusually placed treasury boss.

Note that god-made dungeons won’t be drastically different from the regular ones. They are the same in terms of mazes and still should be beatable by a typical half-AFK Godville spelunking party. They would also be a rather rare thing, at least for the next few months, so don’t expect to get into one quickly.

In other, less important, news:

Befriending Monsters
Remember an invite to Godville — an activatable item that helps gods friend each other? Apparently, some of us sure did, as it turned out that many deities have lots of invites laying around. Here is a new way to put them into use… on monsters!

With a tap of a finger, you can temporarily befriend the monster your hero is currently fighting. A bewildered beast will stop fighting at once, surrender all its belongings and retreat peacefully. All future encounters with this monster will be bloodless and lootless, at least while the magic lasts, which should be around a day or so.

A few things to note:

Tamable Mark
As the roster of Godville monsters grew over time, it became a bit difficult to guess who could be tamed or not, and when. From now on, if a hero is actively looking for a pet or has a free space in his ark, all pet-wannabes appropriate for his heroic level will have distinctive bone mark in their name.

Keep in mind though, that “To tame or not to tame?” is still a hero’s question, not god’s. But even if your hero chooses not to, now he will mention that in the diary.

New Coupons
Staff at our daily newspaper is eager to spice things up with a couple new coupon options. The first one will add a new POI on the map, and POIs are good for many things. The second one will let your hero get an unplanned side job upon cashing it in.

As usual, don’t forget to update your Godville app (Android, iOS) to enjoy the latest goodies.

This extraordinary year is coming to an end and we can’t wait to bid farewell to it. So let’s start our traditional Christmas celebration early!

Lots of things are going on in Godville on holidays. The most notable ones are snowflakes ❄. They can be knocked out of monsters and holiday reindeers, fished out of frozen ponds and lakes or extracted from the godpower capacitor in Godville Times.

Why do you need to know all of this? Because snowflakes are cool and versatile. They can be sold for lots of gold. They can also be used as wildcards in the newspaper’s bingo game. Moreover, three or more of them could sometimes turn into a pinata-style snowman — a perfect opponent to our brave heroes.

And of course, the main dish — seasonal gifts. At this time of the year they are practically falling out from everywhere — monsters, snowmen, newspaper’s bingo, etc. Gifts can turn into things the hero is looking for, boost experience, replenish godpower or do good in some other way. Basically, gifts are great.

Finally, let’s not forget the very special town of Laplandville. Conveniently located next to Godville, this festive town is already preparing to welcome its customers with great offerings and a holiday mood. Oh, and Santa Clawses and Satan Clauses are back and ready to be tamed by the lucky ones.

The special is here to stay till January 2. Happy Holidays!