Well, it took some time, but it’s finally here – new Godville app redesigned for iOS7. The app was “flattened out” to make it look better on the latest mobile OS from Apple and it has some new cool things too. On iPhones is has two secondary screens that can be revealed with handy swipe gestures: swipe left to reveal Friends/Guild Council and swipe right to bring up the Game’s Menu. Remote Control moved closer to the Diary, but here is the cool thing – most of the time you can avoid opening it, as now there is a brand new Mini-Remote! Press and hold the Remote button and then drag to send an influence of your choice. That’s how you show your divine reaction while still reading a diary. 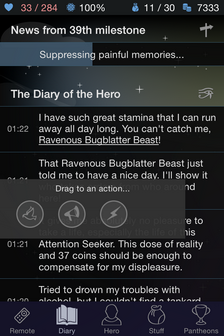 Mobile web pages got their share of facelifting and some new perks too:

Finally, a fresh batch of awesome phrases has arrived into the heroes’ diaries. In the mean time, the Spring Content Cleaning is underway. If you have that one phrase that you wish weren’t in the game, it’s a good moment to mention them in this forum topic.

New species has been discovered in the living world of Godville. Do you remember holiday monsters walking around with free accumulator charges? It turned out that they were only a first wave and there are other special beasts too: Wealthy (walk around with pockets full of gold coins), Bricked (like to carry bricks, sometimes even gold ones), Enlightened (restore some godpower when defeated), Glowing (can infect hero with an aura) and even more. Winning over the special monster usually gives some perks, meanwhile losing to it sometimes results in an equally unique penalty. So pay attention to the adjectives in the monsters’ names and don’t miss your lucky beast.

In the meantime, annoyed by the adventurers underground goblins finally had it enough and screwed up some of the treasury hints by making them double-sided. So don’t be surprised if you see a knotty arrow on the map and pay attention to the exploration log because one of the directions is still correct. Btw, there are two new dungeon types:

There are also two new auras to help the heroes find peculiar monsters:

Finally, an announcement from our players: Are you smiting for smooches? Hurting for hugs? Is your idea of a good Valentine’s Day telling your hero to beat someone up? Sign up to Tournament of Champions: Valentine’s Day Massacre! Sign ups are open until Midnight, CST February 10, 2014.

It’s that time of the year when the feeling of coolness is accompanied with the joy of unpacking presents.
As usual, the hordes of Santa Clawses and alike swarm into Godville for whatever reason. They carry so many presents, so they literally just litter them around, making heroes happier and wealthier. Important note: for the first and only time during the holidays these special monsters can be tamed!

This year nature also rewarded us with a new invention – a special breed of holiday monsters that gift an accumulator charge once defeated. Pay attention to whom your hero is fighting and don’t miss your chance.

Finally, for this very special occasion, a pop-up settlement of fair tents was opened right next to the capital. Laplandville welcomes all visitors with bargain sales, generous traders, and extra-effective chapels.

Greetings, Godville gods! Are you ready for some good news?

Let’s start with spelunking. To make tedious underground explorations more exсiting heroes can now end up in special named dungeons, ones that have certain aura-like effects. This effect can do something nice, not very nice or just strange and fun. Pay attention to the introduction phrase at the beginning of expedition to know what the effect does.

In the effort of streamlining the Remote Control, the “Send to Arena” action now requires only 50% of godpower, just like the other options in close proximity. In the meantime, not finding a duel opponent still guarantees a consolation prize. One more note about the “Challenge a Friend” option: from now on, winners of imaginary sparring fights will be rewarded with 1% of real experience (only once in 24 hours), which is infinitely better than it was before.

Some other nice news:

It’s known that certain astrological alignments of stars cause defeated monsters to rise as the undead. Strong rumors have it that this Halloween will see undead summonings like never before. On a positive note, hallo-zombies sometimes carry very nice loot with them, so consider meeting them as a sign of good luck. Zombocalypsis will last for the next three days – forewarned is forearmed!

In other news, there are bunch of sweet features in dungeons. Their interiors have just been updated with new rooms, monsters and other goodies. Moreover, the heroes have finally learned to put treasure direction hints right on the map (which, btw, is now displayed on the fight’s log page, once exploration is over). These nice additions will surely make spelunking more pleasant.

While the heroes were spelunking and collecting gopher wood, great Godville artisans have just finished the construction of a new pantheon for tracking Ark building progress. Please give a warm welcome to the Pantheon of Arkeology! Btw, if you go to dungeons using one of Godville mobile apps, update to the latest version to make sure you’ll see a bigger map.

Meanwhile, the Ideabox has got a brand new section for dungeons submissions, which also includes ER. You’re surely remember that you can get a nice godpower bonus for voting in the Ideabox, right? Well, starting from today, ERers will get the same bonus too.

The time has come to bring more meaning to the life of templed heroes. Sure they are already busy by saving gold for their bright future, but what if something bad happens before that? Something like global warming or heavy rain that will cause a giant flood… So let them build something big and buoyant, like an Ark. Just in case.

But there is a small problem here. As it was foretold in the ancient manuscripts, proper arks have to be built with a special kind of wood. It doesn’t just grow in the nearby forest, so heroes will have to search for it.

Luckily, there are as many as three separate ways of obtaining this wood:

Yep, now we have dungeons! No one knew for sure what’s in there, but there were rumors of big rooms, long passages, hidden traps, strong bosses never seen before and rich treasuries. Heroes are too scared to enter dungeons by themselves, but sure enough, a god with a temple can make a compelling conviction, using a recently discovered new button on the Remote Control.

The main goal of a dungeon campaign is to find the treasury, which contains lots of gold, loot and yes, this rare gopher wood. Heroes are capable of finding the treasure completely on their own, by choosing directions at their will. However, wise gods can read the map and chronicles and guide the heroes with god voices, greatly increasing the overall chances of the party.

There could be various strategies and goals of dungeon exploration and it’s up to gods how much (or little) godpower to use, as most of the boss encounters could be avoided. But be prepared for the fact that the first few explorations won’t look easy and may take a bit more time. Not finding the treasure is not a big deal, as heroes won’t lose anything irreplaceable.

Final note: dungeons are for fun and you don’t have to explore them if you don’t want to. The hero is able to collect all of the required ark wood from temple and epic quests. Hail ZPG!

In other news, ones longing for new content submissions are kindly welcomed to check out a few dungeons first and then proceed with submitting their gems using the newly added category in the Ideabox. Grammar corrections for existing entries are welcomed too, as usual.

If you’re into dueling, make sure to check out new community-organized championship ‘Rest in Pieces’ with really awesome prizes!

Little Bit Of Everything

Greetings! Today’s news are full of small, but still pleasant bits and pieces:

And here is a good news for those who tired of “wasted” encourages when the hero is already at his full health (and opposite is true for punishments). While these outcomes can’t be removed completely, from now on they will occasionally give a nice bonus – a temporal aura of rage (or bliss for evil heroes).

Lastly, rumor has it that tribbles love to make their home in mystery boxes and the like. Be careful with these things. 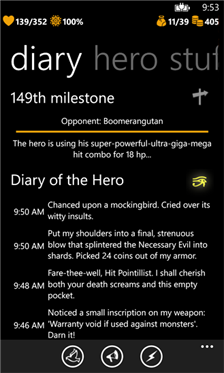 Not only does it supports all the bells and whistles you can find in other Godville mobile apps, it also utilizes the power of the platform with support of don’t-call-it-Metro UI, live tile notifications, lock screen support, etc. It even features a new experimental Remote Control to make poking your hero even more enjoyable! So, if you have a Windows Phone, get the new app from the store and let us know what you think in this forum topic or via Ideabox.

Regardless of the mobile news, make sure to check out this dueling tournament organized by our fellow players, with some nice prizes involved!

This time around we want to talk about Ideabox. User submissions and community participation were always an integral part of the game and today we are introducing some nice perks to it.

In a day or two, the players actively participating in Ideabox voting will start getting a new special bonus – their heroes will be more effective in town prayers, restoring twice as much godpower as usual. Once activated, the bonus will work for a few days and it’s likely to continue to work as long as the god continues to actively participate in the voting process. You’ll know that the bonus is active if you find a special phrase in the diary when your hero prays in town.

There is some under-the-hood trickery, so mindless clicking won’t do any good, so please vote wisely! This feature is an experiment to increase community participation and we hope we won’t have to kill it off due to abuses. In the end, just keep in mind that every single vote you cast in the Ideabox helps to make the game better!

To make it even better, the game has just been updated with a lot of diary entries, hundreds of new monsters, and finally it got a shipment of long awaited high-level equipment.

Lastly, the news for those playing in a web browser: